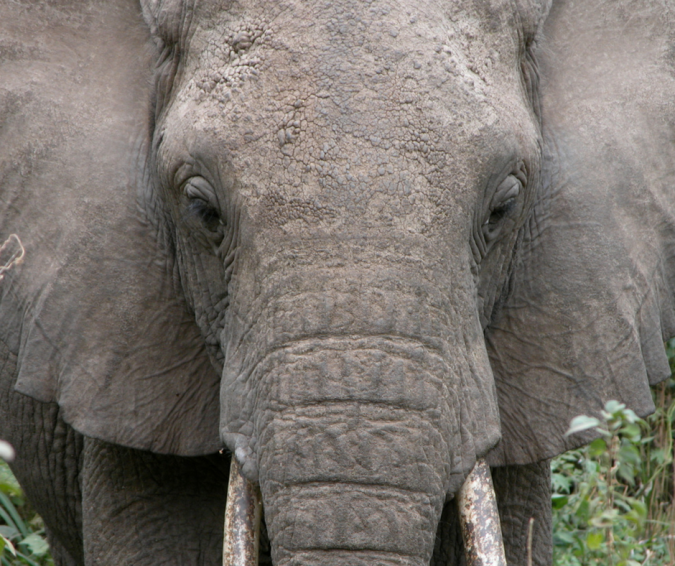 It took twelve waiters to carry in the centerpiece. A young Indian elephant on a great gold platter, posed as if sleeping, its trunk coiled around the carving knife on which the candlelight glinted. Silence fell as they heaved it onto the table, their expressions grim but satisfied. The camera crew crept in as closely as they dared. The guests put down their knives and waited.

The Gastrosophist, sitting at the head of the table, dabbed at his mouth with his napkin and laid it down again. The waiters melted back against the walls, sweat shining on their forearms. The chef herself, broad and sturdy-backed in her clean apron, eyed the guests. But no applause came. The mood was solemn, expectant.

‘This looks very fine,’ said the Gastrosophist. And he rose from his seat.

He plucked the carving knife from the coil of the elephant’s trunk. The young woman beside him gave a nervous giggle, and his pale eyes swung towards her. The eyes of the cameras followed.

‘Like King Arthur,’ she said. ‘The sword in the stone!’ He smiled at her, and she pressed her lips together, as if to keep more words from spilling out. He reached out with the blade and tested it on the beast’s trunk, so that the first two inches of snout fell away in a perfect slice, the steam still rising from it.

And now the guests did applaud. An intense burst of clapping punctuated by whoops of delight. But when the carving knife rose again they all fell silent.

The Gastrosophist climbed up to stand on his gilded chair and sank the blade into the elephant’s back. The hot skin crackled as it split, but did not resist him. The knife cut deep and long and came out clean. He laid it to one side and began to part the roasted flesh with his hands, one knee up against the creature’s skull for leverage.

Slowly, and with much effort, the beast’s back parted, and now the chef and her three helpers came forward. With much heaving and tugging there emerged, like a perverse caesarean birth, the next delicacy, framed perfectly on Camera Two: a lioness, skinned but fully clawed and toothed, her mouth propped open in a snarl.

A howl of pleasure erupted around the table. Several guests stood up to see more clearly, slapping their hands together and sharing looks of glee and awe. Their host’s companion – the young woman who had spoken and who looked so lovely in her pale green gown – reached out a finger to touch the lioness’s paw, and a man beside her roared in her ear as she did so, making her squeal and leap back. The air in the room thickened with the smell of meat.

The second challenge now in front of him, the Gastrosophist picked up the carving knife again. More waiters, quick and graceful with the cameras on them, stepped forward to clear space in front of him on the table. Plates of cheese and shellfish and domes of perfumed rice were carried away by deft and silent hands. Their master leaned over the flayed cat, and pressed the tip of the knife lovingly into the base of her neck. He scored downwards, the warm skin and muscle springing open easily this time, and there was murmuring and the shifting of chairs and feet as his guests craned their necks to be the first to see.

Inside the lioness, its limbs curled tightly as it lay in foetal position on its side, was a chimpanzee. Its pose was so lifelike that it almost seemed it could be sleeping, or else curling up in fear, its arms and legs tightly folded and its face tucked in.

The Gastrosophist climbed right up onto the table and he knelt astride the ape, his expression now unreadable. He looked at it for two long minutes, the carving knife balanced in his hand; a sort of bliss, perhaps, in his communion with this animal cousin as the party held its breath and waited.

He lowered the carving knife so it pointed down towards the chimp’s protected belly.

‘What is it?’ hissed the woman in the green dress to the man who had roared at her, and he bent to whisper something in her ear that made her clutch his arm and gasp at him, her cheeks reddening. But then the chef, whose eyes were fixed as keenly on her judge as his were on the chimpanzee, gave a soft, deliberate cough.

Breaking his reverie, the Gastrosophist turned to look at her, his blade still grazing its chosen entry point. She gave the smallest shake of her head, and he turned from her to the ape again and he seemed to understand. He put aside the knife.

The Gastrosophist reached down and took the chimp’s arms in his hands. He prized them apart, and there, clutched against its bosom, he found the masterpiece that made his guests cheer and stamp their feet so that their glasses clinked together and the cutlery rattled on the table.

A stillborn human baby lay there, pale and tiny, its eyes closed and its lips ever so slightly parted. It was moist and greasy from its incubation inside the layers of roasted meat, but the fine fair hair on its head and its impossibly miniature finger and toenails gave it all the realism that was required of it. And better, more miraculously still, beneath the translucent skin of its chest could be seen a heart, artificially beating.

The Gastrosophist bent closer, the knees of his suit trousers picking up soup stains from the table. He lowered his face over the infant, so its false heartbeat almost touched his lips. The chef stepped nearer, her eyes burning, her hands wringing the sweat from each other. All around the table, the guests might have been turned to stone.

Abi Hynes is a drama and fiction writer based in Manchester, UK. Her fiction has been published in print and online in journals and magazines such as Litro, Interzone and minor literature[s], and she was shortlisted for the inaugural Bath Novella-in-Flash Award in 2017. Her plays have been performed across the UK, and she is currently taking part in the 4Screenwriting 2018 course with Channel 4.

One thought on “The Gastrosophist By Abi Hynes”

Join our newsletter to support our writers and keep up to date with our competitions, call-outs and blogs.